The nonviolent struggle against land grabbing 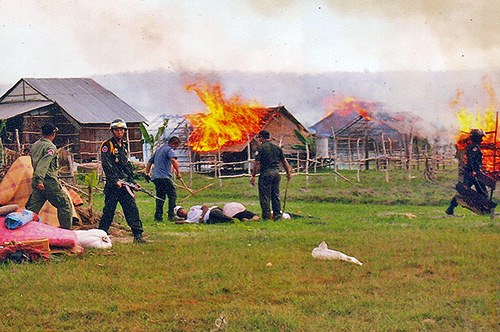 A forced eviction in Sihanoukville in 2007. The use of violence and intmidation by the police or military is common. In 2009 mass evictions displaced about 27,000 people across Cambodia.

Fifteen people were packed into a two-bed hotel room. Each person from Pursat province, north-west of Phnom Penh. And each one telling the same story: “The company is clearing our land. If we oppose them they come and hit us, take us to court, put us in jail, make us afraid.”

Brother Long invited me this evening to discuss ways I might be able to support their community. I was already in Phnom Penh to co-lead a workshop and we happened to be in the capital city the same week. I sat and tried to listen and ask questions, to understand their situation and what they see are the available solutions.

“Two weeks ago we were so fed up with the company and our local authorities that we blocked the main road to Battambang to make it clear we have a complaint. Look, here are the nine demands we gave them.”

I was impressed with the energy and initiative of this group of rural Cambodian farmers. Most of them have primary-level education and here they are taking on a well-connected and well-financed Cambodian corporation. What courage!

“But it’s not enough. There are six districts affected by the land concession and only one district is complaining. Before, the company would clear our community land right in front of our homes, now they are more cunning. They clear land far away from our homes where we don’t see it for many days - up by the mountains and deep in our forests.”

Many rural Cambodian communities rely on a mix of agrarian practices and forest gathering. I’ve been to some communities in the deep of the Cambodian forest and each time I’m amazed at what can be harvested from the trees, bushes and roots. Once I was served what I thought was tapioca pudding. It was made from the seeds of a local bush. There is a deep sense of serenity there. And when a company is bulldozing fields right by your house it’s a call to action. When they bulldoze land far away you might not notice it for days, weeks even. The large majority of the community, then, was simply not interested in getting involved when the problem was “out of sight, out of mind” and the cost of resistance seems too high.

While I sat in that small room listening to the stories of this community I was encouraged by their experience, courage and hope. Yet there was fear and despair, too. There are very few “success stories” of communities winning their land back from companies and government officials. And many communities’ are feeling worn down and frustrated. The likelihood of spontaneous violence is ever-present. It’s therefore vital to maximise the community’s knowledge and skills of active nonviolence.

In response to that meeting I teamed up with two local Cambodian organisations and a national community-based network of land activists. We collaborated on a workshop developing nonviolent strategies for long-term change. The key goal being the nonviolent recovery of their land and the nonviolent expulsion of the companies from their respective communities land. This workshop ran in December last year (2010) with about 25 participants from four different communities. Those who joined left with a greater understanding for an overall strategy, and we hope to follow up with further training and coaching.

Jesus’ confrontation of the economic, political and religious authorities throughout his ministry came at a high cost. He could have run away. Instead, he faced events as they unfolded, became a knowing recipient of violence (in response to his nonviolent provocations of healings, accusations and demonstrations), and therefore offers all of us an opportunity of transformation - either to walk away from our desires to control others, of getting what we want in life without consideration of the consequences on other people and the world around us, or to nonviolently walk towards those who abuse us. In short, Jesus gives us space to work towards reconciliation between all those we currently and formerly have tried to control for our benefit (or vice versa). We are no longer conformed to the world, but transformed!

What I am seeing in the community in Pursat - and many others in Cambodia - is an answer to a prayer prayed by just about every Christian who has ever lived: “Our Father who is in heaven, your name is holy. May your kingdom come, your will be done on earth as it is in heaven!” Here, in the midst of despair, the struggle of Brother Long and his community for nonviolent change gives me glimpses of the kingdom coming.