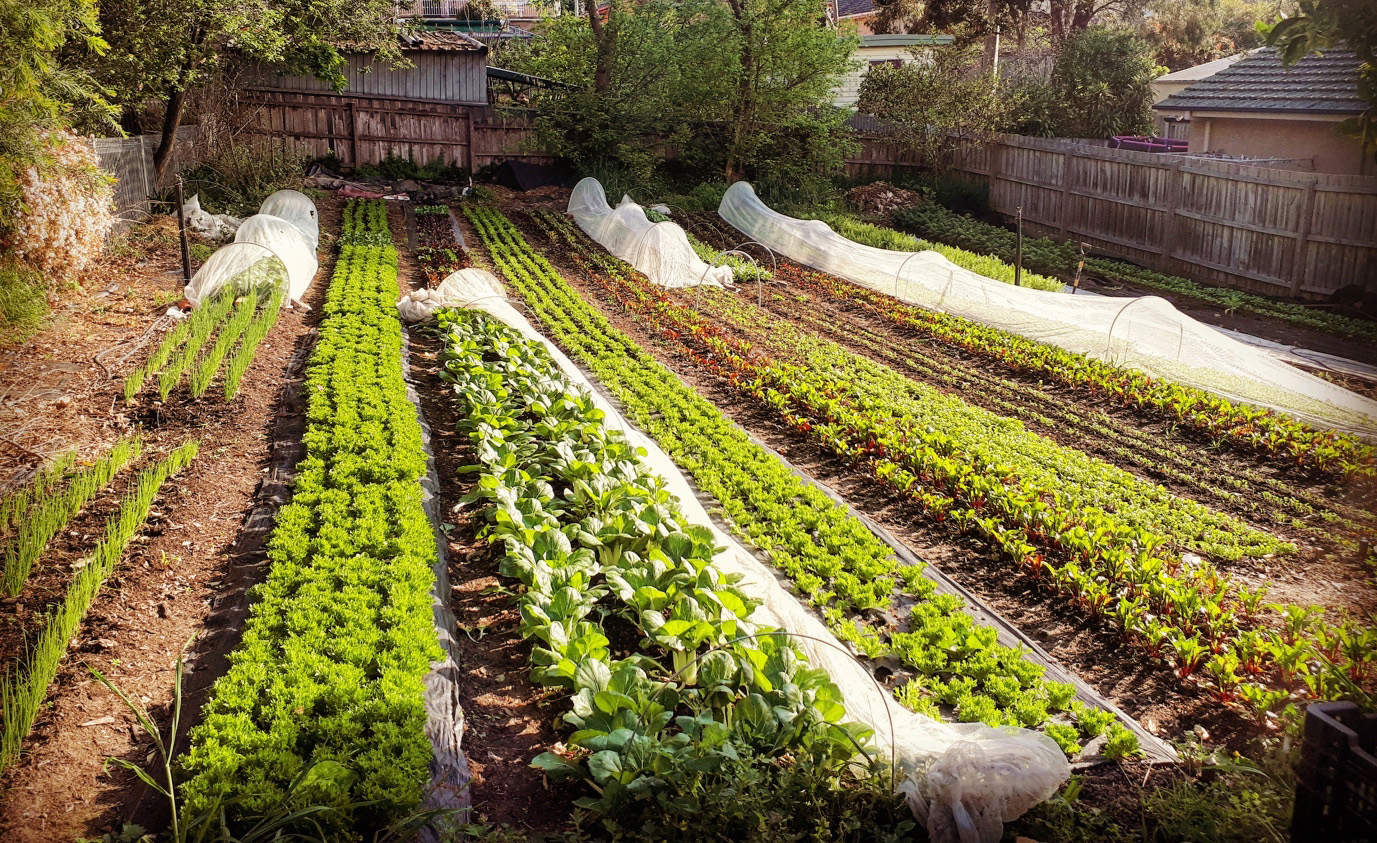 When I see lawns, I mostly wonder: why do we grow grass when we could grow food? There are millions of unused lawns in our cities these days. A few hundred years ago, lawns were specifically used as symbols of wealth and power: the larger the lawn, the more servants or slaves at their disposal to use precious land for a non-essential task.  In my view, our wealthy suburbs still espouse symbols of status with varying levels of lawn care and no cricket being played. Call it ‘beauty’ but it is an expensive use of space. In other neighbourhoods, it’s more likely you’d pass Commodores parked on the front lawn than any sprinklers. I first saw those cars from Google Earth when I was scouting for unkept lawns in Melbourne suburbs where Australians had a different kind of dream. I wanted to trial a crazy business idea… to grow market quantities of fresh food in multiple backyards I’d borrow. So I landed in Heidelberg West with lots of unused, brown lawns.

At a time when a lot of farmers ponder about profits over the next hillside, and when a farmer makes only a few hundred bucks per acre, the common perspective is to expand. But I have often wondered, how small can a farm be? Economies of scale follow a logic to a point, but they can also lead to a rat race zero-sum game.

My decision to pursue urban agriculture was guided by a few factors: gratification in the outdoor work, to learn how to produce something for a local customer, and to create positive, unique stories that would contribute to social change. This intersection of regenerative agriculture, home economics, and community inspired me to create ‘Spoke & Spade’, a community supported agriculture (CSA) urban farm.

I started by digging up the front and backyard of a rental to show just how productive 20 x 7.5m veggie beds could be (I got permission). In the subsequent year, I’d be offered several other parcels of local land (and rural land in other states) to which I said ‘yes’ to just another two further plots nearby. In total, it made up 100 x 7.5m beds, just shy of ¼ acre of free land 10km from the CBD!

Happily, you don’t need much space to be busy if you bio-intensively produce food. It can also be a source of income when done well, although, not easily. I chose to distribute most of my produce through an exciting alternative economic arrangement known as CSA. On this model, each week I packed on average a $1000 worth of my veggies to 30 customers and they collected 35 weeks of the year—not bad for production around the hills hoist! My customers paid upfront for 12 weeks at $30 a veggie box and took a share in the farm’s abundance or failure. The CSA approach celebrates what a fairer food system could look like: the seller (i.e. farmer) receives an assured capital for upfront sunk costs (all the work preparing crops prior to harvest) and if the investment is lost due to unforeseen circumstances (i.e. severe hail or flooding), the members, informed and educated by their closer relationship to their farmer and food system, understand that they took part in the risk of agriculture… betting on nature. 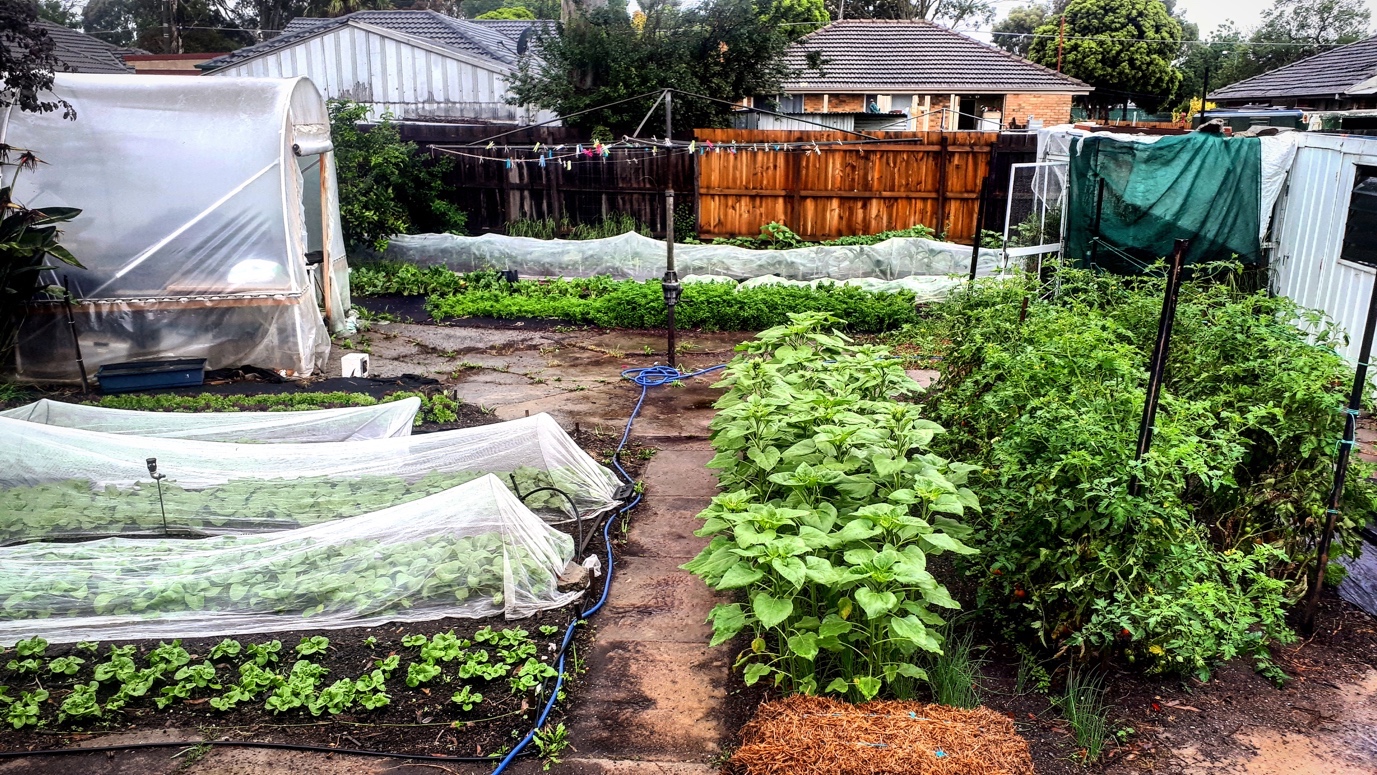 The economics of (urban) farming

After all, every farmer is a gambler: extreme optimists in the face of a lifetime of seasonal adversity.  For time immemorial, we have bet prayers to the wind, hoping God or gods would make rain fall, enough and softly enough, when our plants needed it. For many farmers there are no security nets without such rain: unless you’re in locations where crop insurance and government subsidies play Monopoly, only further spiralling the agricultural world into absurdity, and often leading to reckless land use. Fortunately, I had easy access to mains water and irrigation, but there was still a lot of guessing going on. How often and how many carrots compared to tomatoes would my customers want and how many seedlings need to be planted each fortnight to stagger that harvest evenly? A lot of the learning came quickly and with many mistakes. It’s harder to grow consistent carrots than it might seem!

Overall, I followed five key principles in deciding what to grow:

For the most part, my customers received more ‘value’ than they actually paid for. Some weeks we’d overpack the boxes due to an abundant harvest. Other weeks, I’d be short or overestimate available shares, and each box held only $20 of food. Overall, the customers were happy. We developed trust and sometimes even a friendship. I was their farmer and they were my friends to feed. It was beautiful (and small).

Of course, my prices were higher than the average grocery store (although sometimes not by much), but there is value in ‘real food’ when so little of our fresh food is actually now fresh. My salad mixes would last for four weeks in the fridge, only starting to look like that of what you get in the supermarket a fortnight on. My carrots tasted like what your grandmother remembers, not the watery imitation of hydroponics. My greens weren’t sprayed in a rotation of insecticide, pesticide, herbicide and fungicides. Instead, I fed the soil compost and it fed healthy crops which rarely needed intervention from pests or disease. I weeded with hand tools. For many reasons then, 30 families visited a cool-room next to a Commodore in the backwater ‘burbs of Melbourne every week, and that story continued to their tables. One might say it was very human scale agriculture.

Across the board, it seems that more and more jobs are a bit meaningless. I think one of our goals as Christians is to create new economies where work is meaningful and improves the state of society and biodiversity. My business was in some ways a success, but it also had a lot of failings, and many challenges.

One of the key challenges with small business is to make it financially viable. I’m not sure I ever reached that point in three years, but given a more time (i.e. by the fourth year), I believe I’d be able to achieve a profit of around $35 000 p.a from backyard farming in Australia. I only reached $30 000 sales in my last year with a 70% return, i.e. $10 000 of expenses and $20 000 of profit. It’s not a great idea if you’re looking for financial stability. I worked 2-3 days elsewhere simultaneously (as many farmers do) to supplement my income.

Starting something new meant a more personal challenge. Without clear examples gone before, friends, family, and others found it hard to understand what I was doing. The hardest part for me was not money or comfort, but difficulty socially. I heard scepticism behind people’s encouragements, and in the first few seasons, I needed to push ahead without much to back my vision. That takes a lot of determination (and/or stupidity).

Slim profit margins also drew me into conflict with my values. Being a small-scale producer means that while I may want to support the poor, or those who cannot access my product, I was often struggling to make a living wage myself. In my first year, I would sell my produce to those who could afford it—for the most part white, educated, middle class, wealthy families—excluding poorer income brackets which, funnily enough, included me, the grower, in the first year! I would shop along with my neighbours for fresh food at Aldi because I couldn’t afford to eat my own food, unless it was the scraps for waste.

A lot of growers I know face this kind of ethical challenge: selling to the rich whilst wanting to pass their goods onto the poor. For my farm, I decided the ‘cause’ was to produce good, fresh food, not necessarily to tick every box of across my value chain.

Despite all this, I felt I’d found a vocation: where meeting a great need in the world interconnected with my own passion for regenerative agriculture in the age of the climate crisis: a system of farming that seeks to rehabilitate and enhance the ecosystem. 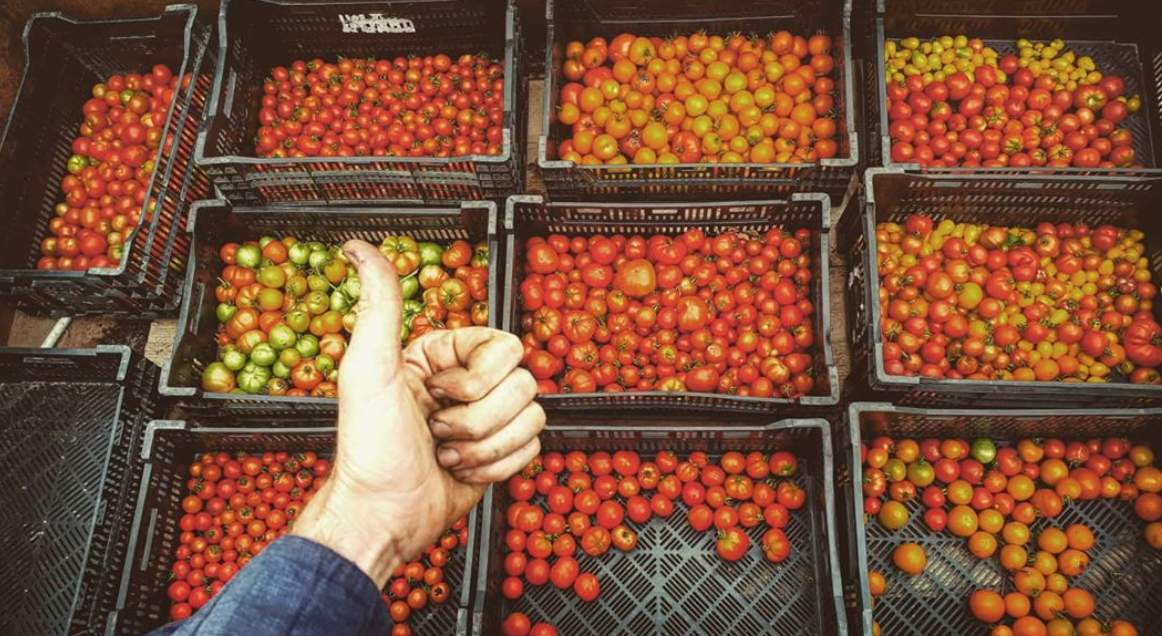 It may not have been financially comparable to wages I could have earned elsewhere, but it was a fantastic, financially-ethical pursuit, at least in my view. Jonathan’s recent article (Manna Matters, April 2021) addresses the matter of commerce and faith, asking the question of how or if these intersect or are in conflict. In my business, I didn’t see a conflict with my faith: I considered and still consider my work to be part of the fruition of my faith.

On a practical level, this is how I tried to engage in commerce and/or business in a way that aligned with my faith and values:

I realise the rise in “green” consumerism can be greenwash and/or act as a placebo for real change, where individual behaviour, viewed through a systemic lens, does not change the systems at fault. However I believe our small actions are an integral foundation for a stronger, active political voice. They go hand in hand: both are needed for a just world.

As a consumer, I believe we need to carefully consider and spend more money on products from people and business that reflect our own values. As a business owner, I saw it as my responsibility to share about how I would use the money earned (including how it would earn interest) and felt accountable to my customers to spend it in a way that kept on creating a sustainable and fair economy. Some relatively ‘poor’ people bought my ‘expensive’ food, and I wonder if for some, this was part of their decision-making: it aligned with their values. 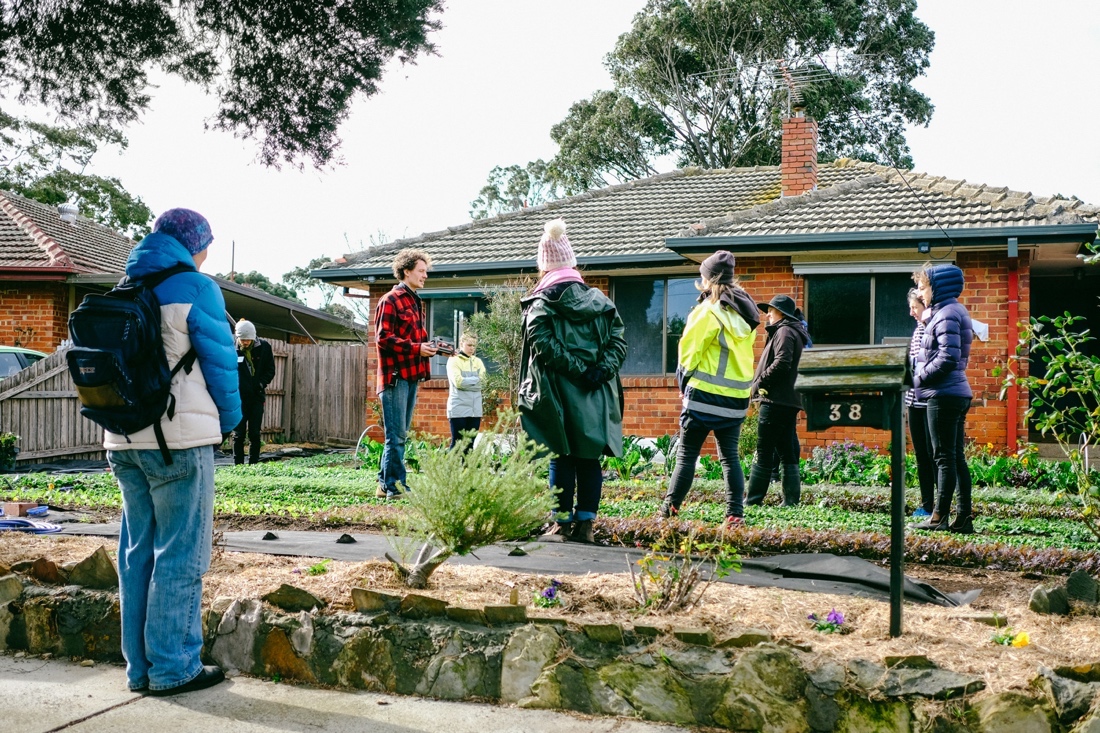 Conventional agriculture is enormously complex, and provides a large portion of our food supply. But if I was to summarise my critique: it has and continues to effectively destroy the systems on which biodiversity, including humans, flourishes. We need great change from our food systems in the next few decades. The scale of that change may decide the future of biodiversity as we currently know it. Put simply, we need regenerative agriculture: it is pivotally involved in more than 25 of the 100 of the solutions Project Drawdown lists as methods to reverse global warming. A transition from conventional agriculture today to regenerative agriculture is not just for farmers to adopt as an answer, but for all of us involved with eating: from advocacy to which farmer you purchase from, even what food you compost. There aren’t enough farmers to voice the justice for which they’re responsible. For my part, I shared wherever I could without a price tag and offered my voice through the media to greater influence eaters and growers alike. Everyone can be an advocate for the values of the Kingdom.

Time and money, worth and work

It’s funny that, for many of us, growing food is a form of leisure. From a wider historical lens and current global perspective, that sheds light onto some of our privilege. But it also points to something true: working in the ground or with nature is inherently good for us.

I spend my time farming to be involved in creating abundant life: to paint a moving picture over which I am not fully in control, only choosing some of the colours from which to paint. Gambling on sunshine, I am connected to God through my work.

Our engagement with money too can reflect God’s Kingdom. This may come from where or how we work to earn income, or how we trade that money for goods or services in the home economy. Not just in farming, but in many areas of commerce, there is room to create, support, and bring about a great many beautiful things. Money and work hold power in that. If we engage with them without intention, we are drawn into a game with increasingly few winners. Personally, I’d rather plant carrots.