None shall have too little..

Experiences of the food crisis in Cambodia 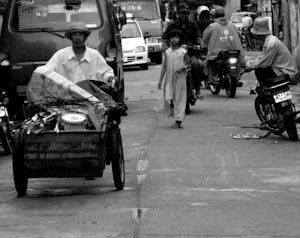 A scavenging garbage recycler in Phnom Penh, one of the many groups of people who live hand to mouth and are immediately affected by changes in food prices.

A few people have asked me recently how Cambodians are dealing with the 'recession'. Recognizing their genuine concern and good hearts, I have searched for a diplomatic and non-melodramatic response, but in this case, the truth is just not reassuring. How are Cambodians responding to the recession? They are dying from it, the slow, silent death of old people and small children from malnutrition as rising food prices cause families to eat less with less variety. Crises like these are hard on all of us, but disproportionately affect the poor. Since Cambodia came out of war and oppression in 1991, the people have benefitted from development, and a new middle class has grown, but the past two years have brought high inflation. Families that were finally stabilising are now falling back into poverty.

The wealthy (with whom I include myself and anyone with the ability to read this electronically) statistically spend roughly 10% of our income on food. The poor spend around 80% of their money on food, and the very poor, those living on a dollar a day or less, spend their entire income on food. In Cambodia, we have experienced roughly 20% inflation in the last year on average. The price of chicken went up 60 % but the price of magazines only went up 10%. For my poor neighbors who spend roughly 80% of their money on food and are not in the habit of buying magazines, 20% inflation is a low estimate. Food prices have gone up much more than anything else; rice, our staple, has doubled in price in the past year.

More Costly For Some than for Others

For my family, this inflation means that we don't go on as many outings on weekends. I have curbed my book addiction, and we don't buy cheese anymore. Our food budget has jumped from 20-30% of our income, but my son was still able to start preschool this year at the age of three. We are putting off replacing our rusty little car for another couple of years.

For Huon, the cook for the InnerCHANGE team office, a single woman in her forties, who works seven hours a day five days a week, making twice what a factory worker would make for six full days of work, the inflation means that she is riding her motorbike less, eating less and choosing cheaper food. She is not saving at the moment despite the need for surgery in the near future and the fact that she has no one to take care of her when she is old. She says: 'I know that I should save some money in case things get worse, but then I see my neighbors who are hungry and I have to share, or how could I be a Christian? I just have to trust God for the future.'

For Bora, a motorbike taxi driver who came to Phnom Penh to work while leaving his wife and child to farm their land, the rising cost of gasoline, food, and rent in the city has meant that he cannot send money home to his family. Additionally, two rice crops were ruined by a drought one year and a countrywide locust infestation the next. The family will have to borrow money to buy seed next year. Bora's daughter is seven but won't start school again this year. He used to go back to his land every other weekend to see his family, a two-hour trip, but he can't afford to now. His wife is going to look for work in a factory in their province and leave their daughter at home with a grandmother. Bora says: 'The villages are empty of everyone except old people and young children. Everyone is going to the cities to find work.'

For Huon's neighbor, an HIV-positive widow who works in a cigarette factory and feeds six people - herself, her elderly mother, and her four young kids (aged between 2 and 8) - on $1 a day, the rising cost of food means that the family is eating only rice with a little bit of dried fish on top once a day. This will probably result in her becoming ill again because the AIDS drugs she is taking don't work if the person taking them isn't well-nourished. Getting ill would put her job at risk. Realistically, it may also mean that at least one of her younger children will die before the age of five. Her kids are often sick and her mother has a persistent cough that won't go away. None of her kids are in school or can read.

What Can We Do About It?

My fear is that Christians in Australia and the US, rocked by natural disasters and shaken by the finanical crisis, are only going to see suffering in the people close to them. I have already heard good, faithful people of God refer to 'taking care of our own first'. While this is an understandable reaction to this stressful and uncertain time, we still have far more options and resources than do poor Cambodians. Non-governmental organisations that serve these people are hurting for funds because giving from the 'rich West' is down. The World Food Programme has pulled out of Cambodia due to lack of funding.

In the upside-down Kingdom of God, the antidote to worrying about not having enough is to give more. In Biblical parlance this is called 'making purses for yourselves that will not wear out' (Luke 12). This is the time to give more, knowing that the poor will be more adversely affected and vulnerable than we are.

Samantha Baker-Evens works with InnerCHANGE and has been in Cambodia since 2004. InnerCHANGE is a Christian Order which lives amongst the poor.