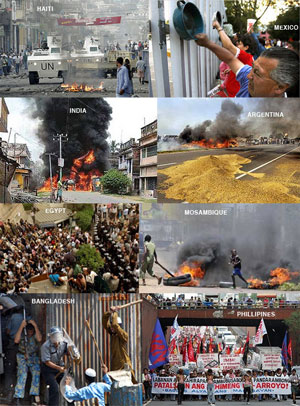 You have probably heard that the world has been in a 'food crisis' for a couple of years, but other than an annoying increase to our grocery bills, it can be hard for us in Australia to treat it seriously. However, the UN's Food and Agriculture Organisation estimates that since mid-2007 an additional 75 million people have gone hungry. The story by Samantha Baker-Evens puts a human face on this statistic.

World food prices - especially for the three key global crops: wheat, rice and corn - have been steadily rising since 2000. Between mid-2007 and mid-2008 there was a sharp spike in the prices of these crops - 130% for wheat, 98% for rice and 38% for corn. This had a dramatic impact on the ability of the poor to buy food, resulting in food riots across three continents. Since mid-2008, the export prices for these crops has dropped, although prices in developing countries still remain high.

So what has caused this crisis? The current food situation is a perfect storm of factors coming together all at once - some of these are what are called cyclical factors, which means they come and go; and some of these are structural factors, which means they will affect food prices for the long term. At the root of it all are some fundamental conundrums concerning our global food economy.

However, perhaps the most significant underlying factor in this food crisis is the one least talked about. Since the Industrial Revolution we have evolved a global economy that is dependent on undervaluing food production. The fantastic cheapness of our consumer goods is dependent on cheap wage labour in the urban centres of developing countries, who are in turn dependent on cheap food in order to survive. It is these who are hurting the most in the current crisis. The dark irony is that urban migration in developing countries is itself largely a result of the undervaluing of agriculture that keeps food cheap, as broken and dispirited farmers are left no option but to stream into the cities looking for work.

I am personally convinced that a fairer and more ecologically sustainable economy is dependent on bringing the role of agriculture back to the centre of things, and this ultimately means paying more for food. But how can we get there without increasing the suffering of the world's urban poor? Solving this Gordian Knot is one of the great challenges of our time, as if we didn't have enough to sort out already...

The Food Crisis and You

How can we take responsibility for our part in the global food system?