Home » Manna Matters » May 2015 » Perceptions of wealth in Australia

How do you rank?

Perceptions of wealth in Australia

When it comes to Budget time, it seems that everybody is doing it tough. A couple of years ago, the government changed the rules so that families on $150,000 a year or more wouldn’t be eligible to receive family payments. In response, The Daily Telegraph found a couple on $150k who said 'you can survive on $150,000, but you definitely aren’t doing well,' while in The Australian, a couple on $200 000 said 'the government are making it bloody hard.'

Everyone in Australia likes to think of themselves as 'middle class'. In fact, it doesn't seem to matter whether you are in a middle, high or low income bracket, you are likely to think of yourself as somewhere in the middle. To be exact, 83% of people think they’re in the middle income brackets (the fourth to seventhth income deciles), when, of course, only 40% actually are (see graph). Hardly anyone thinks they are in the highest or lowest income decile, when, by definition, 10% of the population are in each.1 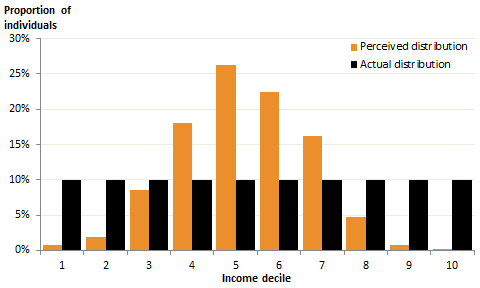 Source: Matt Cowgill, 'We are all dead: A discussion of Australian political and economic issues and ideas', 13 May 2013, https://mattcowgill.wordpress.com