The story of Green Collect 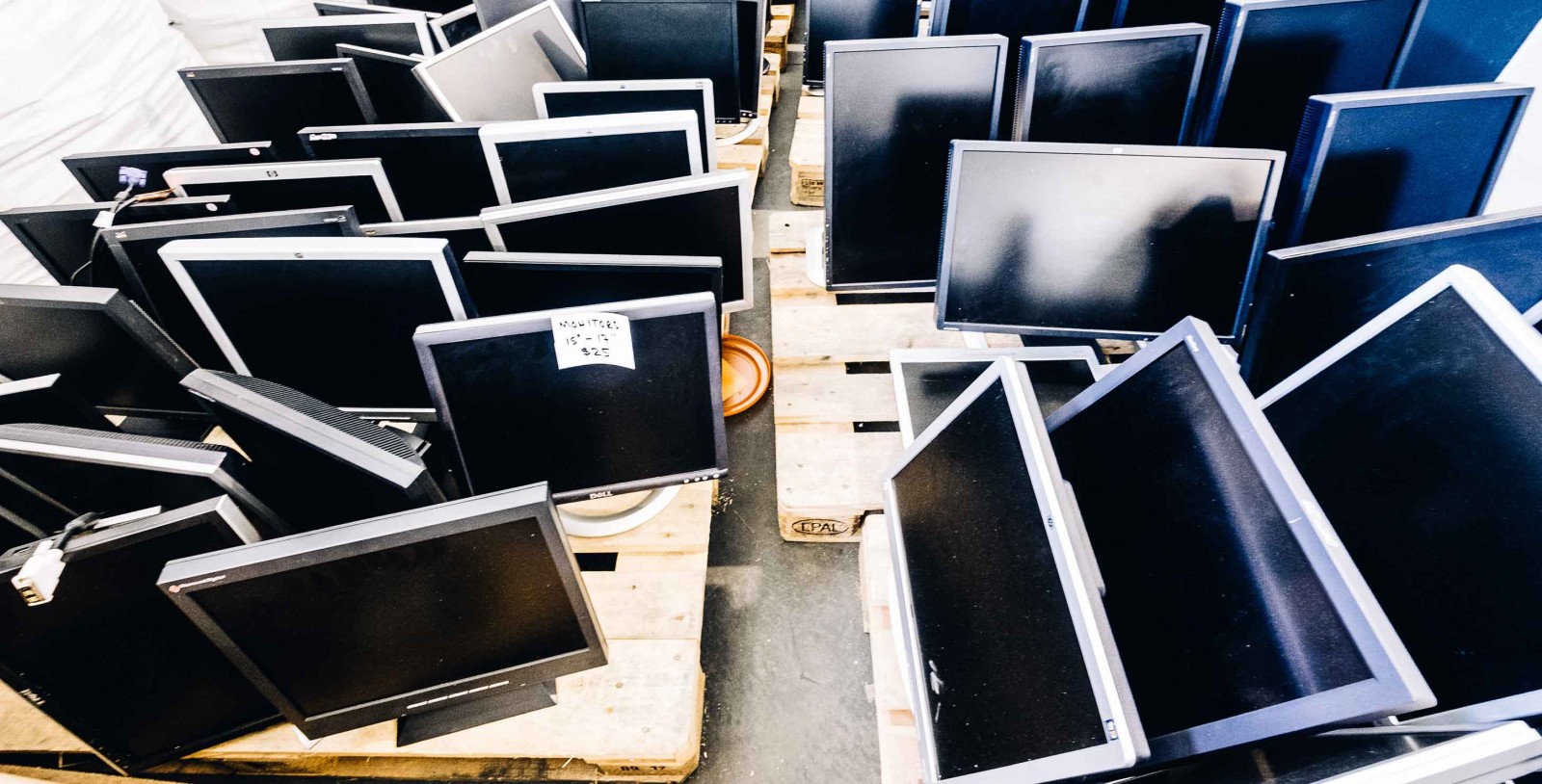 As an immigrant from Europe, Ed arrived in Australia with fluent German and plenty of trades experience, but found he was – professionally speaking – back at square one. Not one to sit around and waste time, he charted a new career path which has ultimately led him to a successful transition into Green Collect, a Melbourne-based social enterprise specialising in waste collection, up-cycling and recycling. Ed has now been with Green Collect for more than a year.

Originally from Yugoslavia, he spent 25 years in Austria working as a professional electrician before moving to Australia three years ago. ‘After a while, my job provider sent me to Work for the Dole, but after working for 100 hours there I was sent to Green Collect on placement,’ he said. ‘When that arrangement finished, I was told I’d be very welcome to stay on, so I said yes – I’m not really the type of guy to stay home and watch TV.’

Ed, 56, now works on staff four days a week as a warehouse assistant and has completed a Certificate 2 in the field, but considers himself an all-rounder. ‘Green Collect has really been something special for me – it was a lucky opportunity to learn English, to meet people and experience Australian working culture,’ he said.

‘It’s been a great discovery for me – I call it my “bingo moment”. We’re all together here in the same boat – a small team that works hard. I feel good here.’

Alongside its up-cycling/recycling efforts, Green Collect provides employment and training opportunities for the long-term unemployed, including people who have faced refugee experiences, mental health issues and homelessness. These programs give people the chance to develop new skills in sustainability, the world of business and social equity.

Green Collect operates a store in Yarraville and a warehouse/shop in Braybrook as well as marketing stock online, with an annual turnover of around $900,000. It’s one of the estimated 20,000 social enterprises in Australia, but one of the few which now manages to pay its own way.

The organisation is the brainchild of husband-and-wife team Sally Quinn and Darren Andrews, Footscray residents for more than 20 years. ‘We started back in the early 2000s when I was studying environmental planning and Sally was doing her Masters in Social Policy,’ Darren said.

‘We were both doing a subject in triple bottom line reporting and separately came across BP Australia’s corporate citizenship advisor, who was talking about what BP was doing in that space.

‘At the same time, Sally and I had been dreaming about somehow creating an enterprise that worked for environmental sustainability, while also working alongside communities to create new employment opportunities. In our previous jobs, we had seen first-hand that it was almost impossible to get secure housing without a job – and without secure housing it was almost impossible to get a job.

‘In considering its role as a corporate citizen, BP had written something of a manifesto that proposed employing people to work in a recycling initiative – just what we’d been talking about. BP subsequently supported us in a pilot program collecting corks from the hospitality sector to be recycled into such products as car gaskets and cricket balls.

‘We later received some federal funding to further develop the idea and were auspiced by Urban Seed during that time. Sally and I continued to build on the idea and developed a “green office” venture, providing waste office audits and recycling mobile phones, printer and toner cartridges. We then established Green Collect Ltd as a not-for-profit social enterprise in 2005 with the objective of alleviating poverty through employment and training activities.’

Green Collect operates under a board of directors which includes Sally and Darren. Sally is the CEO, Darren is operations manager, there’s a finance manager and a passionate staff team. ‘Our purpose is to include people who face significant barriers to employment through environmental work and resource recovery by collecting from office environments to re-use, re-purpose or recycle,’ Darren said.

‘Growth has been steady from the days when three people walked around with postal buggies to today, when truckloads come in and we have our warehouse and retail outlets.

‘Green Collect has partnered with different groups along the way, such as Brotherhood of St Laurence, Baptcare and Urban Seed. Now, as a stand-alone enterprise, Green Collect employs around 30 permanent staff, processing as much as five tonnes [of waste] a week and offering a paid service to around 100 corporate, government and council offices, with around 25 regular contracted pick-ups and more on an as needs basis.

‘We’re also reviving our waste audit consultancy services for companies wanting to measure the impacts of what they do beyond their core businesses.’ The organisation delivers boxes or cages to offices on either a regular or one-off basis at a cost of $240 for 100kg, to be filled with electronic waste, stationery and redundant items. When filled, the containers are collected and delivered to the warehouse for sorting.

The niche office items received and processed by Green Collect now fall into 50 categories, from pens, pencils, rulers, batteries, bulldog clips, document trays, magazine holders, tape dispensers, staplers and folders to electrical goods such as fans, kettles, toasters, coffee machines, VCR players, vacuum cleaners and sub-woofers. Add in the thousands of mobile phones and chargers and mountains of cork and computer cartridges and it’s been said the enterprise has saved more than a million items from landfill.

‘In the 2016/17 financial year, total office items collected came to 84 tonnes and, of that, folders accounted for more than 21 tonnes – or 53,210 folders recycled or upcycled,’ Darren said. ‘Mixed stationery accounted for over 30 tonnes. Of those 50,000-plus folders we receive every year, we re-use what we can, but the rest has to be manually separated into cardboard, plastic and metal and recycled separately.

‘Plastics come in many different types and PVC, unfortunately, is probably the worst, both in its production process and in managing its recycling, so we upcycle that into the covers of notebooks.’

One utility company has reported that Green Collect takes 10% of its waste, but costs less than 10% of its waste budget. Everything coming in is weighed and documented, so all corporate clients receive a full report back on what was collected from them, when it leaves the warehouse and whether it was recycled or up-cycled.

Sally said just over half of the organisation’s permanent staff positions were prioritised for people who had faced significant barriers in gaining and maintaining work, whether through homelessness, issues of mental health, disability, disrupted education or the like. ‘That’s an open commitment we have, but we also offer six-month programs for about 30 people a year in training and work experience, either for future placement at Green Collect or as a pathway towards formal training or employment in the warehousing and logistics sector,’ she said.

‘Part of that may mean undertaking a Certificate 1-4 in warehouse operations, but, overall, we want people to experience a positive workplace where they can build their confidence, enjoy a sense of belonging and constructive work relationships and develop further employment skills.’

Green Collect has finally closed the gap on the 20 per cent of its funding it has, historically, had to find through philanthropy and government grants. ‘For the past six months, we’ve actually been meeting all our operating expenses through our trading income, which is awesome,’ Sally said. ‘We’ve been working towards that for 12 years and it means we can now access some of the usual ways a business might grow, such as debt finance as well as grants.

‘We know we’re now sustainable at our present size, but in order to grow and secure the future of the enterprise, we do need to build on our infrastructure. We now have a diverse and highly skilled board of directors and our plan is to double our revenue and operations over the next three years – and so double our social and environmental impact.’

Another thriving initiative is Upcycle Kids, which offers pre-schools supplies of reclaimed office materials for art, craft and creative play, as well as ‘environmental incursions’, where children attend workshops to ‘create new treasures from old rubbish’.

‘We’re conscious of having diverse revenue streams, which includes a really strong retail arm contributing about half our income,’ Sally said. ‘However, education is another significant component, with kindergartens particularly important because we can use some of the things we don’t have good solutions for – things that aren’t easily recycled. We work with the four-year-olds on thinking of things that are thrown away as being resources rather than rubbish. We have a full schedule of pre-schools we visit – we had 10 or 12 last term and 20 booked for second term this year.

‘Individuals come in for mentoring and schools and universities send groups at times to see what we’re doing in terms of social enterprise, environment, entrepreneurship, ethical fashion and similar. It’s not always smooth sailing – we often experience tensions holding the balance between how we work with people, reaching the best environmental decisions and growing a viable business.

‘There are often hard things that happen and questions we ask of ourselves, but we believe the stronger the business can be, the greater outcomes we can achieve. However, we’re certainly no normal business and we put people at the heart of all decisions. As a result, we’re all transformed by this work where things seen to have little value are recognised and given another life.’