Home » Manna Matters » May 2020 » The Social Foundry and Cassinia Environmental

The Social Foundry and Cassinia Environmental 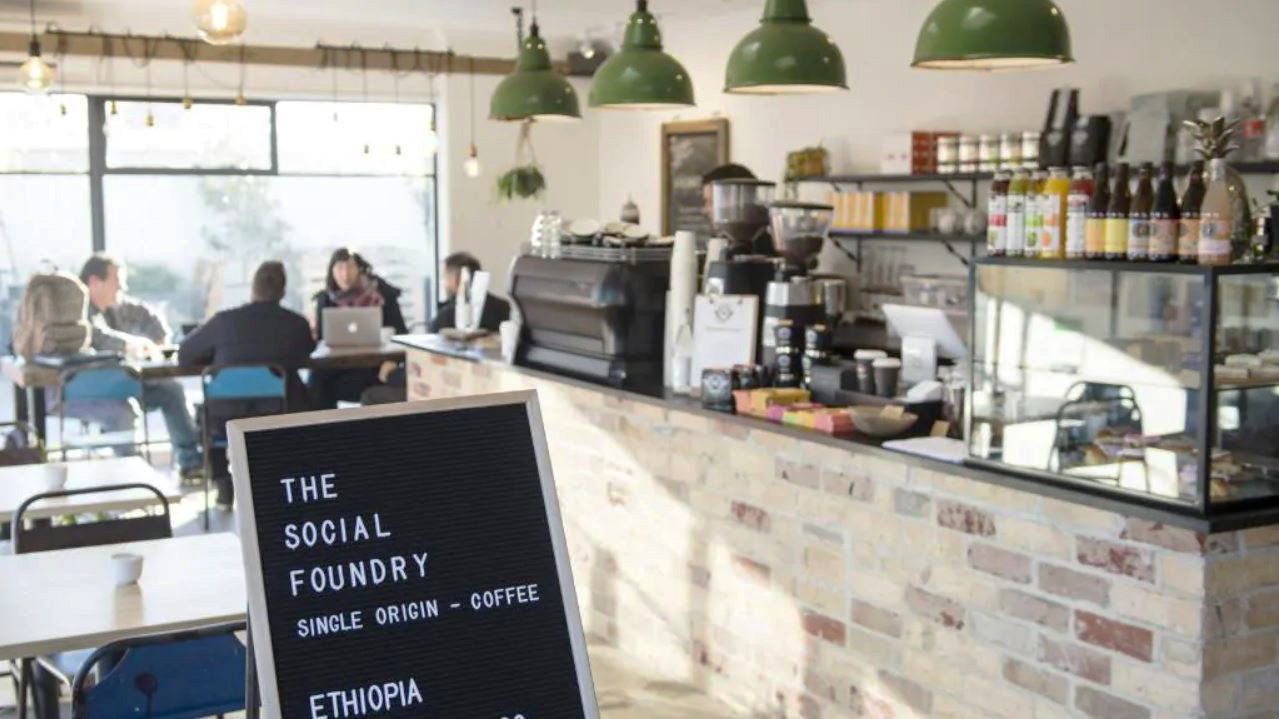 When Kyneton businessman Paul Dettmann met him, John (not his real name) was an isolated young man, facing daunting challenges and living in a one-bedroom unit with no social supports around him. Keen to offer a helping hand, Paul organised a wage subsidy and employed John for three days a week for almost two years. During that time, John earned his driver’s licence and developed skills in fencing and carpentry, but ultimately moved interstate to be closer to family.

That brief encounter stirred Paul, feeding into conversations and concerns he was sharing at the time with his friend, and local minister, Simon Burnett. Between them, Paul and Simon dreamed big, envisioning a place where disengaged and disadvantaged young people in the town could be trained and supported in acquiring skills to ease them towards a more promising future. More than that, it should be a hub where community grew, with all people valued not just for what they could do, but for who they were.

Four years later, after some early fits and starts, the Social Foundry is a blossoming and fruitful enterprise, offering its trainees teaching, encouragement and experience in life skills, the hospitality industry, building trades and, soon, conservation land management. Its bright and airy café, open six days a week with outdoor eating area, disabled access and a playground for the kids, served over 13,000 customers last year.

Menu items start with build-your-own brekkie and range across light fare such as croissants and waffles to heftier serves of pork belly, burgers, vegetarian dishes and salads, washed down with hot drinks or something cold.

Simon and Paul still both work full-time, volunteering their time at the Social Foundry – Paul tends to property matters and strategy, while Simon focuses on culture-building and marketing. Simon serves as senior pastor at Kyneton Baptist Church, with Paul fully engaged in his burgeoning business, Cassinia Environmental, a company looking to be on the front foot in carbon offset work, biodiversity markets and in re-imagining landscapes incorporating conservation-focused agriculture.

Established in 2015, the Social Foundry operates with three primary channels which all facilitate personal and workplace mentoring on a short, medium or long-term basis.

A fourth stream likely to come on line in the first half of 2020 is conservation land management, tied in with Paul’s Cassinia Environmental projects. Key activities in this area are expected to include working with farmers to help restore paddock trees which act as valuable habitat for many native species and building a native food garden at the Social Foundry’s premises.

A registered not-for-profit enterprise, Social Foundry also welcomes visits from VCAL students as part of their hospitality coursework and others seeking work experience placements, as well as producing its own brand of sparkling mineral water, ‘7 Springs’, which is sold around Victoria.

Simon grew up in Melbourne, but moved to rural Victoria in 2014. ‘I pretty quickly identified that we have some challenges on our doorstep here in Kyneton, largely around disengaged young people,’ he said. ‘There’s very little opportunity for them to get a leg up, to get jobs and access higher education.

‘I wondered what it would look like for a bunch of Christians to gather around and show the Gospel, as well as telling it – to welcome people into community, give them a sense of belonging and provide skills and training as that community came together around them. Locking ourselves away in our bluestone buildings will not be fruitful long-term – we need to be out in the community, listening to its needs and working out how the Gospel addresses them.

‘The Foundry was built on the site of an old petrol station right in the heart of town, involving a design largely dreamed up by Paul and myself and a lot of work over about 12 months on the part of tradesmen and community volunteers.

‘We started off building bespoke trellising for boutique nurseries, but realised that didn’t provide enough traction for our young people to develop their wider skills, particularly their social skills with other members of the community.

‘We took a look across the region and recognised that the biggest employer was hospitality and therein lies a tremendous tool for growing community – we all have to eat and drink. Still, those early days were hard – Paul and I had to employ people with expertise in that space and funding options were limited. We initially experienced a bit of push-back from some local businesses, but they’ve now come round and support from the general community has been excellent. We’ve always made it clear we’re not here to compete with other cafes in town, but are here to train and provide community for those who don’t have it.’

Simon said that, by the end of last year, 81 trainees had completed programs through Social Foundry. ‘Of those people, roughly 75 per cent have gone on to what we term ‘upstream’ – either going into employment, education or further volunteer involvement with us,’ he said.

‘Trainees generally arrive by referral from across the region and access all of our programs free of charge, with young people generally completing their program within four to six months. The usual age bracket of trainees accepted into the programs is 15-25 years. Those referrals normally relate to people who have left, or are about to leave, school and those facing social disadvantage.

‘We make it very clear we are not psychologists, counsellors, social workers or welfare carers, but we engage those professionals at times on behalf of our participants. We have 10 staff, from casual to full-time, and 30-40 volunteers as part of our 120-strong Social Foundry community. Any member of the community can come and help out in some way in any of our programs and that volunteer scheme has been very well supported.’

A sixth-generation farmer, Paul Dettmann has broad experience in the agricultural sector and currently farms 2200 Merino sheep across three properties in Central Victoria.​ An agronomist by training, he has 20 years’ experience in biodiversity-based land restoration projects both in Australia and such other countries as India, Ethiopia, Senegal, Angola, Niger, Peru, Brazil and the United States. ​Along the way, Paul has acted in consultancy roles with World Vision and the World Bank and has three times been a finalist in United Nations Environment Awards for Biodiversity.

Since 2004, Cassinia Environmental has replanted and protected thousands of hectares of land in Victoria, New South Wales, Tasmania and South Australia, working closely with Trust for Nature and, in the process, becoming its largest private land covenanting partner. Cassinia also works with both government and corporate sectors, with its 16 partners including Greenfleet, Bendigo Bank and a number of state government agencies and regional local governments.​​

The team has a board of seven members, with Paul as CEO heading a small team of professionals. ‘We started in 2000 with the idea and kicked off as Greenhouse Balanced,’ Paul said. ‘The focus then was on carbon and what we thought were going to be world-changing ideas about the ways carbon and landscape change could be integrated. ‘After a few years, however, we realised we were in the landscape space rather than the carbon space, so changed the name to Cassinia Environmental. We see landscape fragmentation as a major threat from so many perspectives, so reconnecting large areas as a refuge for nature is a fundamental ecological goal.

‘We must have done 50 small projects on other people’s properties before we made our first purchase, planting trees for carbon, but I think we’ve bought about 35 land holdings since comprising around 10,000 hectares. Of those, we’d probably still own 20-25, some in joint ventures, making up some 6000-8000 hectares.’

The organisation has also recently launched ‘aTree’, a donor scheme where supporters can buy a tree or shrub to be planted in an area permanently protected under Trust for Nature covenants.

‘Everything we do is focused around biodiversity, with each of our carbon offset projects set up with at least 20 species of indigenous plants to reinstate, where possible, the ecological systems that would have been there originally,’ Paul said. ‘A case in point is the Golden Sun Moth, which is listed as critically endangered both federally and in Victoria. ‘As it turns out, we discovered that one of the properties we already owned was home to a large population – to our knowledge, the largest population of the moth in the country. On another property we found the endangered Robust Greenhood orchid, which had been believed extinct before Bush Heritage Australia rediscovered it in Central Victoria.

‘As Christians, we have much more reason to care about acting as stewards of creation than, say, secular humanists – it’s such an obvious mandate from God. There’s still so much more we need to do in terms of ecological response, but we feel we’re part of the fabric of that. The respectful application of indigenous wisdom and management is something else that’s going to be a bigger part of our future and ethics around animals is another area where we want to think more deeply.’

Paul sees his role at Social Foundry as being a fellow learner along with everyone else. ‘If you were really committed to someone in a discipleship sense, you might be able to carve out an hour a week for them, or an hour a fortnight, but if you have a workplace you can actually invest 40 hours a week in that person,’ he said.

‘The value of work is not just about the money or what’s produced, but also about the social value and creating a really redemptive, nurturing workplace. As a boss, you have this incredible influence over the lives and happiness of your staff, but we’re all part of the program here and all learning together – there’s no ‘us and them’. The idea of a foundry is a place where something is melted down and recast, where we’re all being changed, moulded and shaped.

‘We often forget the benefit people receive through being part of a community – sometimes the thing that’s most profound is the one you overlook, just having a place where you’re valued and have an important role to play.’

The café has cemented its name as one of Kyneton’s most popular places to visit and is now branching out more into hosting special events, such as the periodic multicultural Feast of Stories, music and bike education workshops, private family celebrations and corporate meetings. Also talked about are the possibilities of future community barbecues, moonlight cinema screenings, food vans and, potentially, replicating the model in neighbouring towns.

Simon affirmed that the board’s dreams for the Social Foundry went well beyond the town’s boundaries. ‘Our vision is to see transformation in regional Australia and we believe that’s going to come from our young people,’ he said. ‘As Christians, we believe that God has created all people and we all carry his fingerprint, so the goodness of God is actually in the heart of every man and woman.

‘The reason we exist is to give good back, so there’s something very enriching, very beautiful, about doing that. We’re all on a journey, where none of us has arrived.’