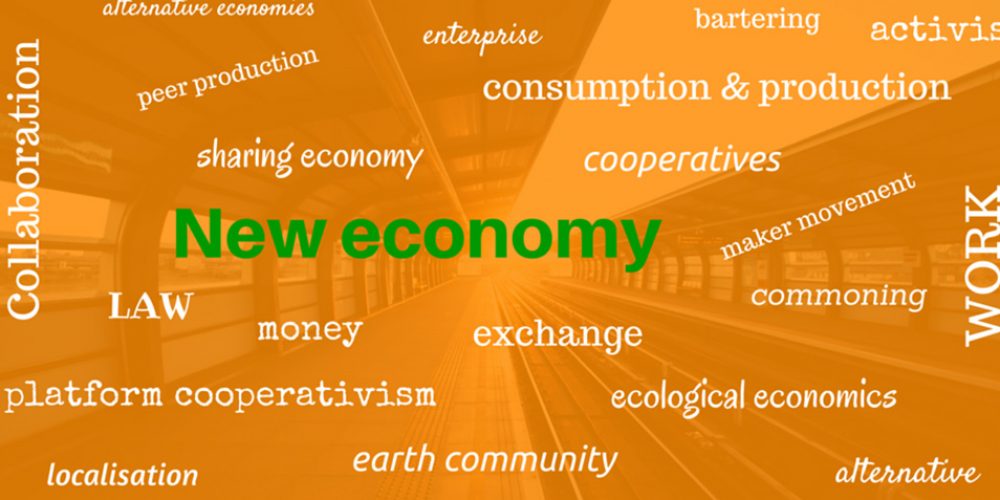 In October, over 200 delegates gathered in Melbourne for the third annual New Economy Conference. Focused on a range of issues and themes relevant to creating a fairer and ecologically sustainable economy and society, the conference brought together a wide variety of people, organisations and communities across Australia who are working to strengthen the commons, grow better food systems, develop sustainable business models and cooperative enterprises, experiment with innovative governance, property and legal models, explore economic theory and learn from indigenous political economic systems.

Held over three days, 19th to 21st October, the conference was facilitated by the New Economy Network Australia (NENA), a network of individuals and organisations building a movement of people advocating for, creating and benefiting from a ‘new’, transformed economic system based on the objectives of ecological health and social justice. This year’s conference focused on the theme of ‘strengthening the new economy for the common good’, recognising that the commons – the wealth, land and resources we inherit, steward and create together – is at the heart of the transition to the new economy.

I was inspired by how the conference worked to embody what the new economy is about in its processes, balancing goals of professionalism, accessibility, authenticity and inclusivity. I was also inspired by the breadth of issues discussed – the event did a good job of highlighting key issues and their interconnections across the economy. The conference attempted to balance the small and local scale with the big and international scale issues and methods of social change. It attempted to balance ideas, research and academic theorising with grassroots and systemic action as well as establishing the ‘movement’ itself.

For the first time, there was a significant session on ‘faith and the new economy’ that included a presentation by Jonathan. The session was received well by folks from religious backgrounds and those from none. Participants could see the importance of faith communities being engaged in the new economy space and the connection between the Christian faith tradition and role in similar social change movements.

The conference also highlighted some important practical projects already happening in the new economy – including conversations with owner/workers of cooperatives like Redgum Cleaning Cooperative, and with the Australian Earth Laws Alliance , with its important ‘GreenPrints’ project working to create Earth-centred governance models for bioregional ecological health in Australia.

At the heart of my inspiration from the conference,though, is that the new economy movement is for something, rather than just against things. It sets a vision for an alternative economic model (or models) that can operate together for good. Despite debates on frameworks, the consistent themes, values and goals are evident.

A key aspect of this vision is the idea of ‘just transitions’ – ensuring a just transition for people and the planet now and into the future, while ensuring the burden of change that benefits everyone is not placed disproportionately on a few, who are often already vulnerable, and that those affected are partners in the solutions to the transition. This is a challenge for the church – ‘green’ churches in the inner-city calling to close power plants while churches within the same denominations in rural areas are made up of congregations that rely on those industries. How does the church advocate for justice for all? What do we stand for, while standing with our people? How do we act and advocate in a way that shows love for our global neighbours and our local neighbours?

Of course, the conference also had deficiencies. As we know, social change movements require continuous improvement – even a changing goal or end point. There were gaps in the ‘aspects’ of the new economy addressed and missing voices in the discussion. Ongoing challenges include the role of women at the front, the range of class and race backgrounds present, the high-level, academic preference of conversation, the dominance of those of ‘privilege’ in the space and the largely missing voices of the poor and marginalised, those most ‘at risk’ in the current economy. In this context, the new economy movement is challenged with embodying the just transitions idea and speaking strongly on important issues, while partnering with those whose livelihoods are caught up in the status quo and who may be further marginalised by the outcomes of what we are advocating for.

A point of both inspiration and challenge that came out at the conference was the diversity of views about what the ‘new economy’ means, what it looks like and how we get there. This diversity is a good thing – a realm of visions that can add rigour to the discussions and enable people to act and live out aspects of the new economy in the ways they feel called and motivated. But it also makes consistent advocacy difficult and communication among the group more challenging; language, ideas and goals require ‘translation’ from different contexts and spheres. It also means a coherent, clear alternative is still in progress – with some debate between which alternative economic framework is best (steady state economics, ‘degrowth', ecological, solidarity, circular, sustainable etc.). This highlighted for me the importance of effective ‘translation’ of our own and others’ language in order to recognise common themes and values and articulate a common vision.

My understanding of what the new economy means comes from my faith tradition, that being inherently connected with my understanding of biblical economics and Christian economic models. Jonathan’s talk on the alternative economic models of the Old Testament, alongside Mary Graham’s talk on relationality as a key idea in indigenous economics that resonates with biblical teachings on community, fellowship and relationship with God, neighbour and earth, reaffirmed this for me. My picture of a new economy is fundamentally an economy of enough, enough for all, that satisfies human needs to allow for human flourishing and the continued flourishing and renewal of creation as God hopes it to be; a regenerative and distributive economy that facilitates enough for all through empathy, connection and relationality with those around us, made in God’s image.

The more I develop my own understanding of what the ‘new economy’ means, the more I see what the church has to offer to the discussion, processes and practice of reimaging our economy. Our tradition – built on prophetic imagination and the idea of shalom and the restoration and renewal of all creation and broken relationships – sets an outstanding foundation from which to reimagine our societies and economies for the common good. Faith voices are just beginning to be heard in the conversation. I look forward to a future conference where people from different faith backgrounds, connected by the principle of ‘do unto others as you would have them do to you’ and the sacredness of the environment, present together on the principles of political economy underpinning their faiths and develop strategies for working towards the new economy together, alongside those of no faith background. As this year’s faith session pointed to, faith communities are involved in the new economy work (regardless of whether we call it that), leading significant social justice movements throughout history, and the ‘new economy’ movement presents another opportunity to collaborate with other faith institutions to address current injustices.

With this opportunity, my ongoing questions for the church and us as Christians are:

Visit the website of the New Economy Network Australia (NENA)